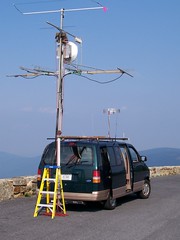 It was a big contest weekend, at least here in the states with the ARRL VHF contest. Lots of people were out looking for elusive VHF openings and stations to work — and found them. Quickly perusing the scores this morning finds many stations worked over quite some distances. Amongst the floods of the Midwest, it looks like a little break was found for the the weather weary.

On the other hand, it was also the weekend of the ANARTS RTTY contest. I was able to participate in the contest this time around from home. However, conditions just sucked. With the solar flux sitting at 64-67 most of the weekend and the K-index from 2-3, not much was bouncing off the ionosphere to work.

I heard nothing east of Texas from Seattle-land. No DX, though I understand there was a brief opening on Saturday evening around 1700Z to Europe.

It’s tough to slog it out with poor conditions. Fortunately, it was a lot of fun and great to be on the air again (more on this later).

Hope you enjoyed your weekend.