If you have a computer controlled rig connected to WriteLog, then the center frequency of the display scrolls as you tune your rig.

How stations are added to the Band Map

Ham radio stations can be entered in any of four ways:

A simple way to add stations without sending the call over the packet network is offered by Bob Holmes, AF5Z, from a note offered on the WriteLog Reflector and mentioned by others:

“The ability to place the call of stations heard on the BANDMAP display with a single keystroke is a useful function. I found a way to do this by accident while experimenting with the “%B” feature within function key message buffers.

Click on SETUP and CW/RTTY/SSB MESSAGES within WriteLog.Fill in the desired function key buffer with:

That is the percent sign and the letter B with no spaces.

While tuning the band with a frequency control interfaced radio, fill in the call sign of a station heard in the CALL field of the QSO ENTRY window and hit the function key you programmed above. A dupe check will be performed on the call sign and the station’s call and frequency will be added to the BANDMAP display. The QSO ENTRY window will reflect NEW STATION, MULT or DUPE as appropriate but NOTHING will be sent by your transmitter.”

Working the Band Map window with the Mouse

The display itself is also active.

A left mouse click on a displayed station selects it. Once selected, you can tune your ham radio to it by typing Enter, or you can delete it from the band map using the Delete key (or use the File Remove Station pull down on the band map window).

A double click on a station will tune your ham radio to it.

A right mouse click in the screen brings up the same menu as is on its File menu. You can save screen space if you use the Band Map’s ‘File|Hide Menu’ command and use the right mouse instead. The Band Map remembers the last setting you had for this command the next time you run it as well.

WriteLog’s ability to follow your ham radio as it tunes depends strongly on what kind of radio you have. Some computer-controlled ham radios can be queried very quickly, but others respond very slowly as you tune the dial. This behavior cannot be controlled by WriteLog.

Some ham radios will themselves slow down as they are polled, so WriteLog includes a configuration option to allow you to slow WriteLog’s polling down if you notice it is slowing down your ham radio. See the RigPollInterval in the Configuration section of WriteLog.ini.

Always have Band Map open upon start up

If you want WriteLog to always open it when you start it, you can default this in the ‘Save Configuration process outlined in setting up WriteLog.

With later versions of WriteLog, the screen can also identify band edges and limit your ‘clicks’ to legal bands. This is important in a couple of examples:

The new Band Map file menu provides the options. With it open, select file and click on the two options shown:

Showing the band edges produces the pink line that shows the bands definition (couple paragraphs down to set this). You can’t see it in this screen shot, but, as an Extra Class operator here in the United States, the orange line stops at 14.000 MHZ. 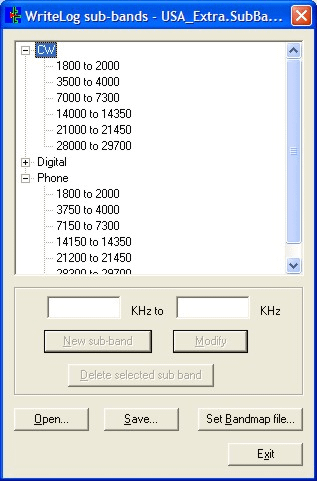 If you are in the United States and are NOT an Extra class, WriteLog provides both a General and Advanced sub-band file that can be used in the Band Map. Click on ‘Set Bandmap file’ and choose your US license class and the appropriate frequencies, shortened with the orange line shown above, will be in your Band Map file.