It should also be noted that WriteLog can have the ham radio log data that has been saved during the contest show up as graphs. For example, if you want to see rate by band – which is not a standard report – you can using the graph function.

To access the standard ham radio reports, go to the WriteLog toolbar, select ‘Contest,’ and then select ‘Create Reports…’ as shown in the following screen: 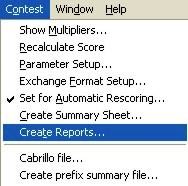 Selecting Reports presents you with the following dialog box where you pick and choose the reports you want to have from the contest: 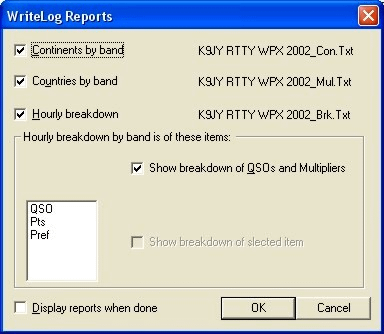 Note that WriteLog automatically creates file names for the reports based upon your contest file name that you saved at the beginning of the contest. Also note that at the lower left corner of the dialog box is a place to check ‘Display reports when done.’ If you want to see the reports on the screen when they are completed, check this box. If you just want to save them in your file location, leave the box unchecked.

Also note that WriteLog will save these reports in the same location as where the contest was saved. You can start getting a lot of contest files piling up which is why I recommended creating separate subdirectories by contest (e.g., CQ WW SSB) and further subdirectories by year (e.g., 2003, 2004) in order to keep all the files together and straight.