Setting up the Sound Board for 2-radio contesting – from the WriteLog Web Site:

WriteLog has everything you need to run complete SO2R ham radio operation with only:

A recommended addition is a second sound card so you can playback recorded audio during the contest.

If you want to run FSK RTTY instead of AFSK RTTY, then you will also need:

Whether you really need to run FSK is a matter of debate. Some rigs don’t give you full control of their IF filter selections if you run AFSK, but do if you run FSK. However, there is no reason for your on-the-air signal to be distinguishable between AFSK and FSK. Which you run matters only inside your station.

Here’s a drawing location of how to wire up two rigs, the Multi+ keyer, and your PC sound board:

This is the cleanest SO2R configuration you can build.

The pictured configuration supports all modes: CW, SSB, and digital (AFSK, PSK) without moving any cables. WriteLog uses the same cabling to receive all modes including its continuous recording feature.

With the second sound card installed, you can use it at any point during a continuously recorded contest to playback the audio from any QSO in your log with a simple right click on the QSO.

The “isolation transformers” in the picture above are described more fully on the RTTY setup page. And the RS-232 to on/off level converters are on that same page.

From the Help Files: WriteLog Notes and INI file entries for two radios

Two radios with one sound board

If you use the Radio menu with two entry windows and tell it you have a Radio Left and a Radio Right, then when you “Activate this Radio” (CTRL+R), the sound board mutes the appropriate output channel. You can have two radios with one sound board this way. If you have not told WriteLog whether you are left or right, it puts all audio on both channels. Note that this muting is in effect whether you are transmitting a WAV file or not, so your microphone signal is also routed to the correct rig.

WriteLog changes output level setting automatically as you switch between left/right rigs. It does manipulate the MUTE switches on your sound board. You can watch this in action by running the same Volume Control application. It will automatically display the changing settings as WriteLog sends WAVE files and records them. You will need to set the levels appropriately yourself from the same control.

The same sound board connections can be used for SSB and RTTY and PSK.

WriteLog puts all its sound board functions except one on the sound board indicated by this ini file entry:

The one exception is the AudioReview function, which WriteLog puts on the sound board indicated by this ini file entry:

If you have two sound boards, the best configuration is to set the two INI entries to different sound boards, and set the Windows default sound board to the one for AudioReview. That way, your AudioReview playback and all other Windows function go on one sound board, and WriteLog’s transmit and receive functions use a dedicated sound board

Software setup is straight forward. Once the equipment is setup as discussed in 2-Radio Setup, open WriteLog, select your contest, and save the file with the appropriate name. There two areas that needs changing compared to the standard setup for a single operator – changing the number of radios for WriteLog and selecting your audio preference. Both changes are accessed from the following screen: 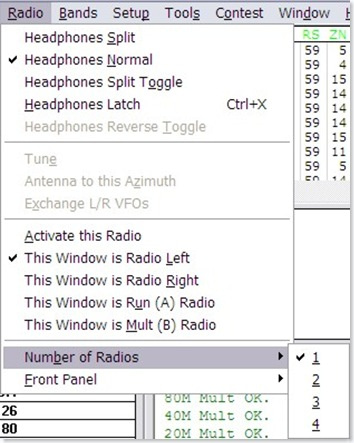 WriteLog defaults the configuration to one radio. Select two radios and the screen provides a second QSO Entry window as shown below:

Moving between QSO Entry windows and other operating hints are provided in the Operating section, but this is all that needs to be done in the software to make it go!

This section has been substantially adapted from Dick, WC1M, from an email sent to the WriteLog Reflector, for which I am very grateful. I have added some screen prints as an enhancement to the words and formatted it for being HTML.

The key to understanding how to operate SO2R with WriteLog is to understand the types of ‘focus’ supported and how the focus interacts with messaging. There are two types of Entry Window focus:

In this example, the Keyboard Focus is on the Left radio on top and the Transmit Focus is the Right radio on the bottom.

The keystrokes for moving focus are as follows:

This allows you to start a CQ on one radio (on the Right radio in the above example), move the Keyboard Focus to the other Radio (the Left radio in the above example) for dupe checking. If you do this, then hit any function key, WriteLog will automatically stop the CQ, move the transmit focus to the second radio, and send the message for the function key just pressed.

Using the example above, you would be calling CQ on the Right radio and listening on the Left radio. Finding a station to work on the Left radio and pressing a function key to send your call (typically F4) will automatically shift the Transmit Focus.

In addition, if you use the Auto CQ feature in WriteLog, WriteLog will automatically restart the CQ on the Right radio after sending your call or exchange.

Putting it All Together

Here are the steps to implement automatic SO2R switching:

1. Edit your Automated Messaging keys (function keys) so that the CQ message us preceded with a ‘%X’. This will be explained later.

2. Press ALT-T and set the time delay between Repeat CQ’s. Shown below is an example.

3. Make sure the box that says ‘Auto Resume’ is checked.

4. Split the audio for one Radio in each ear as shown below:

The top ‘Headphones Split’ should be checked.

5. Use UP or DOWN ARROW to move both Keyboard and Transmit Focus to the run radio.

6. Start a CQ by pressing the appropriate function key.

7. Use SHIFT UP-ARROW or SHIFT DOWN-ARROW to move the keyboard focus to the other radio.

8. Search and Pounce on the second radio. When you find a station to work, hit the function key to send your call (typically, F4).

9. The CQ will stop, the Transmit Focus will move to the second radio, your call will be sent, and the CQ will be restarted on the first radio.

10. When the station answers you on the Search and Pounce radio, press the function key for your exchange. The actions in step nine will occur again except your exchange will be sent.

Note: if you are not comfortable with the automatic sequences, they can be done manually. WriteLog also has a ‘Latch’ feature which will switch audio back and forth to both ears; you can use this or split the audio as your preference.

To review the ‘%X’ function in Automated Messages: In two-radio operation, this retains the current transmit focus rather than switching to the radio with the keyboard. The %X sequence is ignored if it appears anywhere other than the very beginning of the message, and it is ignored if the transmit focus and keyboard focus are already the same. (This command interacts with the Auto-Resume CQ function).

The benefit for automatic SO2R is: if you put %X in the CQ message, then you can hit ESC to manually stop the CQ, then restart it without the transmit focus jumping to the second radio (as it would without %X..) This comes in handy when you need to temporarily stop the CQ to concentrate on the second radio.

Many SO2R contesters will re-map keys on their keyboard to support SO2R contesting. This is done to simplify the number of keystrokes and hand movements needed to perform the SO2R functions.

WriteLog in version 10.45 and up offers a Keyboard Mapping function. Accessing the dialog box from the ‘Tools’ and ‘Keyboard Shortcuts’ from the top WriteLog tool bar yields the following dialog box:

Clicking on the Help button on the dialog box will provide an extensive help file directly from the program.

Other operators will use a program such as FKeys to perform the same functions using just the mouse. There are also many programs that will allow you to re-map keys on your keyboards.