From the iPhone application store write-up:

HamSat is a visualization/utility application that allows you to see the location of amateur radio satellites tracked by NORAD in real time over the Earth (up to two satellites may be tracked simultaneously).

You can see the Earth rendered either as a 3D globe or a 2D map using photo realistic texture maps for the Earth model. The orientation of the map is easily changed by a simple rotation of the device from portrait (3D) to landscape (2D). In either orientation you can zoom in and out as well as pan using the touch screen. Controls are given to allow you to select: the texture maps used, whether shading is performed, whether to draw political boundaries and if a latitude/longitude grid should be presented.

In addition, the application can calculate the rise/set times for a selected satellite, the Sun or the Moon given either the user entered or network retrieved location.

OK…this is cool. Self-contained – so you don’t need to be connected to a network on your iPhone while you are out camping and looking for satellites. Tracking two satellites…nice.

You think it might work on that small screen? Well, here is a two-dimensional view of satellites and their locations: 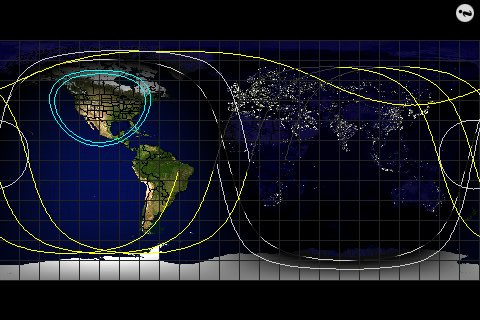 Or the really cool 3-D view of the tracking:

Outside of the cool graphics, there is the mundane information we need to actually hit the satellite with our radio signals. Here is what the rise and set times are for a satellite along with Azimuth and Elevation calculations:

All of this, of course, uses the standard iPhone interface to set up the satellites you want to track, your location, and when particular satellites will do your personal flyover.

I have not done any satellite work, though I have considered it in some antenna unfriendly neighborhoods. I’d love to hear some reviews on this application as it looks well written and helpful for our ham radio hobby.

Please log in again. The login page will open in a new tab. After logging in you can close it and return to this page.