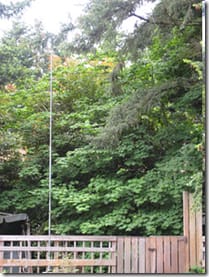 After getting the parts organized for the 40-10 ZeroFive antenna and installing it on the mounting pipe, it was time for installing the radials.

Radials are critical to the performance of any vertical. Most hams put far too few radials under their vertical antenna to have it perform the way verticals do. They let half the signal go into ground because of the lack of radials.

When I lived in Madison, WI, I built a vertical for 40-meters. At the time, I lived in a city lot with a chain link fence around it. I literally put 60-radials around the antenna to the chain link fence. I also connected a radial to the ground system for the tower.

I didn’t care if you had a 3-element  beam on 40-meters. I got in the middle of the pile-up with confidence that my antenna would perform like gangbusters. And it did.

I helped another ham who had a 2-element beam for 80-meters up 120-feet and a full quarter-wave 80-meter vertical. But no radials under the vertical. So, of course, the 80-meter beam worked better.

Then we put down a radial plate and 60-radials of 66-feet each for the band. From that point on, if anyone could be worked on 80-meters, the vertical was the antenna that got the contact. (DX, of course).

Radials are necessary for turning your vertical into a great antenna.

And more wire gives your vertical a perfect launch for your transmitting signal.

Radials are a pain to put down. But necessary.

It took two full days to put down 60-radials. You can see from the picture above that I have large bushes and/or trees to get through with wire. Plus a great deck — one that I crawled under to install ten radials.

The original plan was to have sixty 24-foot radials, but I ended up with some over and under that length. When I could run them longer than 24-feet, I did, especially under the deck and to the left down my lot from the picture perspective. About five of the radials are about 50-feet in length.

You can see all of the pictures at SmugMug.

Next up: performance, including SWR.