The Ionosphere in 4D

The 4D Ionosphere is something that will give you hours of fun:

Today, NASA-funded researchers released to the general public a new "4D" live model of Earth’s ionosphere. Without leaving home, anyone can fly through the layer of ionized gas that encircles Earth at the edge of space itself. All that’s required is a connection to the Internet.

"This is an exciting development," says solar physicist Lika Guhathakurta of NASA headquarters in Washington, DC. "The ionosphere is important to pilots, ham radio operators, earth scientists and even soldiers. Using this new 4D tool, they can monitor and study the ionosphere as if they’re actually inside it."

When I first read this, I checked to make sure it wasn’t April 1st and some foolery. But, it’s real. Here’s a screen shot: 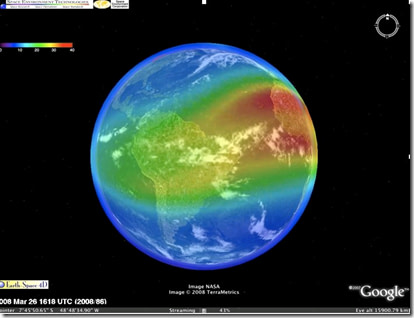 The key is that this information is updated every 10 minutes:

Using the intuitive Google Earth interface, users can fly above, around and through these regions getting a true 3D view of the situation. Make that 4D. "The fourth dimension is time. This is a real-time system updated every 10 minutes," he says.

Undoubtedly, this technology will be banned from CW contesting as well…